Nameless Down, Cursed Up, Cursed Down 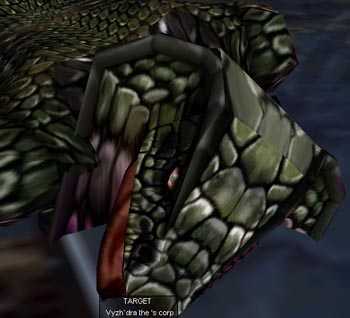 Apparently The Nameless crashed last night.  So Sunday turned into patch day, which was actually quite fun.  We killed the Cursed again and got some new loot. . .at least new to us.  The BST loot will of course go to Mort.  The breastplate is worse than the two BPs which drop in Kael.  Hopefully, the BP will be one of those promised upgraded items in the upcoming patch.  Otherwise I'm not really sure what to make of a BP that's slightly worse than stuff that drops off of pushovers like the Vindy or SoRZ.  But at least the dagger is Godlike.  For all of you who are bitching that the dagger makes rogues too powerful let me tell you a little something about the dagger.  It's going to make a whole lot of rogues dead.  It procs constantly -- more than primal or as much as Myrlokars.  And the proc is a signifigant taunt.  Anyway, I think it was Shakespeare who said, "Not all that glitters is gold. . ."  Either Shakespeare or Robert Plant. . .but anyway, you get my point.

The Idol of Zek happened to be up and we enjoy the AoW fight a whole lot still so we rushed to Kael to lay the smack down on our old buddy: 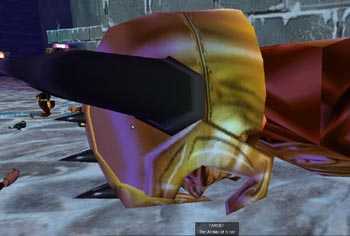 We also scored ourselves a rare spawn -- The Creator -- who usually decides to make his server debut when we're all fast asleep.  He dropped a Hategiver and a the 40 percent haste doo-dad -- also known as loot that is way too good to be on a mob as easy as the Creator.  We only had one death which was Manalope because I kept bugging him to parse the damage of the fight and he lagged out with all the hits on.  Fucking Manalope.  Anyway, I've said it before and I'll say it again, that mob needs to be more difficult.  I think a quick and easy solution would be rooting him on his spawn point.  The designers of Ssrae rooted so many mobs but not where it counts.  Rooting the Creator would make the encounter a *tad* bit more challenging than the poosae-fest it is now.

Now, I'm going to do something I don't normally do here.  And that's give you a link to a messageboard rant.  First off let me tell you that I realize lots of us in the high end game have been ranting alot lately.  I don't want to hear the usual bullshit from you saying, "Quit complaining, if you don't like it don't play the game.  You sound spoiled -- etc etc etc etc etc."  Don't post that garbage on our messageboards.  The reason so many people are complaining and being vocal publicly is because there is a tremendous amount BROKEN in EQ in the high end game right now.  And there are only a few people who have FIRST HAND experience dealing with this broken content.  I'm sorry, just because you killed the Vindicator doesn't mean you play the high end game.  We're talking about stuff that less than 60 people per server -- if that -- have had exposure to.  And I don't want to hear your bitching about, "Well, if it affects so few people than why should I care -- yada yada yada"  I'll explain why.  Because today's Emperor of Ssrae is tomorrow's Vindicator.  If Vindicator had been righteously fucked up when SoV went live we would have bitched and gotten him fixed too.  For those of you who don't remember the entire N ToV loot table was fucked beyond recognition until a number of high end guilds made public complaints and eventually saw that stuff get fixed.  So please, if you don't like rants, don't read this goddamned page, don't post on my messageboard and don't harrass anyone at this link I am going to post.  But for the rest of you intelligent people who actually understand what it is we're trying to accomplish by constantly bitching and moaning, PLEASE read this rant and give it the attention it deserves.  And to avoid any criticism right up front, the rant was written by Kreugen.  Kreugen has pretty much publicly and repeatedly expressed his dislike for me.  So don't think I am posting this because he's my buddy.  I'm posting this because I enjoy the game of Everquest and want to see it succeed in spite of some grave flaws that have surfaced in this expansion -- most of which are addressed in the rant:

Loot of the Day 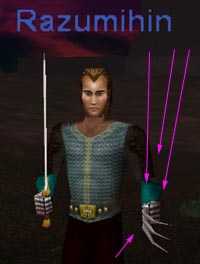 That's the claw of the Cursed. . .not that any ranger would use it anyway. . . 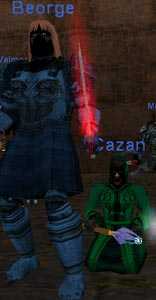