The Evil Empire Takes a Stab at the Emp 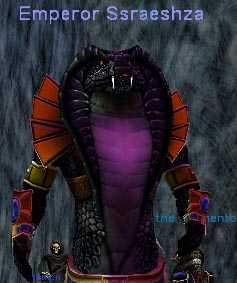 Tonight we staged our first full-fledged attempt on the Emperor Ssraeshza.  For an encounter which is so utterly fucked up and ridiculous (hi deathtouch) the guild did amazingly well.  But it goes beyond the actual fight itself.  The preparation that everyone put in to getting keys and weapons was remarkable.  I've been busier than a one-legged man in an asskicking contest because I've been moving but everyone knew the date we were planning to try the Emp and simply kicked ass to make tonight happen.  No, he didn't die.  We can't win every encounter on the first try.  But I am simply ecstatic with how well we did and how cool under pressure everyone remained.  We know exactly what we did wrong and why we lost so we are eager to get back up there and lay the beat down on that mo faka snake.

Now, about the encounter itself. . .well it sucks.  It's a fucking zerg fest.  Deathtouch is the cheapest mob ability in Everquest.  It's almost embarrassing.  The room is challenging with the 8 snakes and Blood and the fight could be a ton of fun.  But the DT is just lame and turns what could have been an awesome experience into a cheese-zerg-fest.  I can't believe that someone envisioned this fight and implemented it.  I could think of 20,000 things more interesting and FUN than to have players die instantly every few seconds.

All of my bitching aside, tonight was very exciting, even if we did lose.  Most of all I am just extremely proud of the people I play this game with.  As cheesy as that sounds, I don't think most people can relate until they go about equipping a full raid for this encounter.  The amount of time it took was simply INSANE and INHUMANE.  We will post a corpse for you soon. . .

The Wonderful Word of Rhap