My apologies for not updating the site in so long.  Things have been extremely hectic for me and my schedule is only going to get worse.  So when I get to log in for the one hour a night I've been getting lately, I get to deal with all you rotten cacksuggers who log in and tell me how long it's been since the last update.  Well, here's your goddamned update.

So it's that time again -- yes the time you've learned to love to hate or hate to love -- time for me to rant about something.  Now, I'm going to come straight out with a disclaimer on this one.  I am whining.  I'll save some jackass the 15 seconds of glory he'll get by posting on the forums, telling me to STFU cause I'm whining.  Because I am.  This is pure, hardcore, old school, whining coming your way.

For those of you who follow this site closely, you'll remember that last week we got the Emperor down to next to nothing.  In fact, this is the screenshot I posted of his damage bar:

Basically, we knew exactly how to kill the Emperor, but we fucked up.  I wont go into the details but it was a clear mistake we made and we knew how to fix it.  Well, patch day rolls around and guess who gets changed?  Yup, the Emp.  Now, the good thing is, they removed the Deathtouch -- the single cheapest attack a mob can have in a game.  But what is frustrating is, 3 or 4 guilds had killed the Emperor, gotten their VT powersources and are now free to spoil the zone as they see fit.  For all the people who had never tried the Emp, well, no big deal for them really.  But the ones who really got slapped in the face were guilds like mine.  Guilds that were an attempt away from being in VT, who had spent weeks learning one encounter, only to find that encounter gone one day with a totally new mob (just using the old name) waiting to spawn after blood dies.  Don't get me wrong -- in a way it's poetic justice for the handful of guilds that got their powersources.  More power to them.  They were first and earned what they got.  But goddamn I hate feeling like I got cheated.  The whole ordeal just screams of poor design and lack of forsight.

Speaking of poor design and lack of forsight, how shitty is it that Blood drops such godly loot?  Yes, Luclin loot needed an upgrade.  But to anyone with half a clue, how about realizing that Blood is a TRIGGER SPAWN.  Did we not learn from SoV????  Can't we make it so that there's NO reason AT ALL to kill a trigger spawn???  Why, oh why, please explain to me why, would anyone put GODLY loot on a TRIGGER SPAWN??  Why does it take a loudmouth motherfucker to bring this shit to light?  Jesus, it's common sense.  The question is, will the braintrust of San Diego wait until the clusterfuck of blown Emp spawns begins, the endless rantings of assholes such as myself, or will someone realize the horrible mistake of putting loot on Blood now and fix the mo faka ASAP?  Only time will tell. . .

Yeah, when bordom strikes nothing beats a trip to Steamfont to kill some Gnomes.  Those little cacksuggers wouldn't let me in their guild.  Apparently, they're too godddamned good for the likes of a filthy halfling such as myself.  Well, representing team LoS was me and Adorean. . .here are the results:

Also, unrelated to gnomes but still in the half-sized category, we got Laneser a new hat.  Ladies and gentleman, meet Dopey: 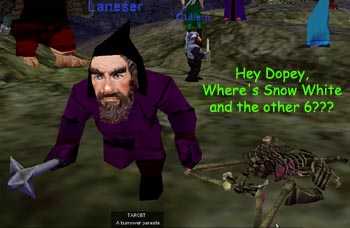 And here is some more random shit to show you since I have no dead Emperor pictures nor any l33t VT pictures to show you:

Yeah, I'm pretty much grasping for anything at this point.  Listlessness will do that to a person.  Oh well, back to waiting for our next chance at the Emperor.  Thank god they made it so we're lucky to get one chance each week now -- and that's if the spawn doesn't get blown.  Simply fucking brilliant.  A grade *A* cockblock guys. . . 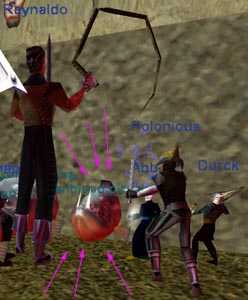 Fish out of water?