There are lots of things I could rant and rave about right now - the Pledge of Allegiance debacle, CNN french kissing Jack Valenti’s asshole and even fucking Californians banning tag in school for Christ's sake, but right now... Jesus Lord, seriously, fug you guys down in San Diego - I hate Ssra and I hate the Emp. Requiring 70+ people to camp the keys, at an EXTREMELY generous 2 hours per part, takes 18+ *days* of our time. I will not even go into the shards - you can take those sticks and shove them up your asses - the only fun part is training the zone after you get your frame and a zone disruption warning really is the cherry on top of that shit sunday. TEE HEE!!!!!

What's even better is that while killing the Emp takes 70+, VT is done with ~40 - and you're surprised so many guilds sacked half their members after getting power sources? Maybe you guys are blissfully unaware of how painful having 70 reasonably intelligent, funny, witty and engaging people clustered together at once becomes, but after 2 weeks of it non stop with the cross section of EQ, I've become some what of an expert on single digit frame rates and IQ's - oh yah, and drama. So whatever, we'll kill the Emp and sack VT eventually but WarCraft III is out today - big congrats to the LoS Storm Reavers - go support a commitment to quality games (hint to VI: this involves play testing, you cacks) and buy it.

Oh you thought I was done? Not even close, Bud. To add insult to injury, I was finally forced to get broadband. I'd resisted the urge for a long time - I mean why? I have a connection at work most people can only dream about and when I get home there's really not that much sufficiently interesting on the net which requires a high speed connection. I was HAPPY with my modem, hot dammit, but with SoL all that changed, and I blame - besides 70+ raids - AE SONGS AND SERVER FILTERS NOT WORKING PROPERLY. I guess when you've got no bard testers and 0 bard GM's you're probably not at fault - I mean, testing something as obscure as one of the class defining features is expecting a bit much. So yay - I can now do Emp without going LD or lagging 3-4 *minutes* in the past. Leet.

Before I wrap up, I'd like to pay tribute to one of the more influential people in my life who pasted away Friday, June 28, 2002 - Henry "The Bull" Del Toro. As telling and fugged up as it may be, The Bull wasn't a scientist, humanitarian or astronaut, nothing like that in fact - he was a morning radio shock jock before the name was coined and the genre trite - and someone who had the unprecedented access to both my ears and my attention in my formative years. Brief snippets on the way to school or those dog days, like Scout's smartly starched collars damp by 9, of summer break listening all morning outside under the muggy umbra of a threatening humidity before the real heat set in, it didn't matter - I was held rapt. The sheer infectious nature of his laugh would make any stunt or bit funny and his heart was always in the right place - he loved what he did and was keenly aware of his impact, though modesty prevailed in his later interviews regarding such, but his real talent was recognizing and reveling in the uncomfortable and awkward moments of life, stretching them beyond what would be the polite decorum of escape, always eschewing tact and even, at times, humane mercy for those found caught and cornered to experience such in the fullest - that propensity to hold unflinching and bear witness to one of the great human event horizons is the most memorable and meaningful bit I thankfully have taken away from it all. R.I.P. Bull.

In between coffins, drama and my bitching, we killed a bunch of stuff, so have a gander. 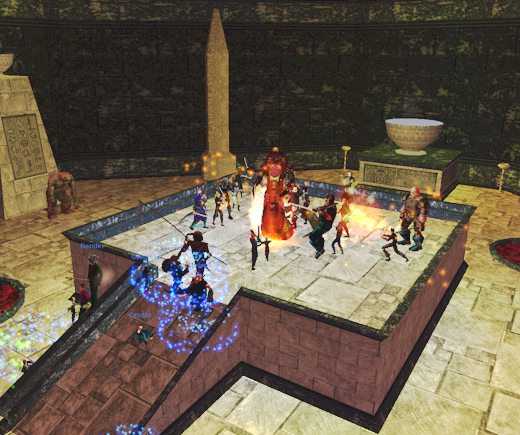 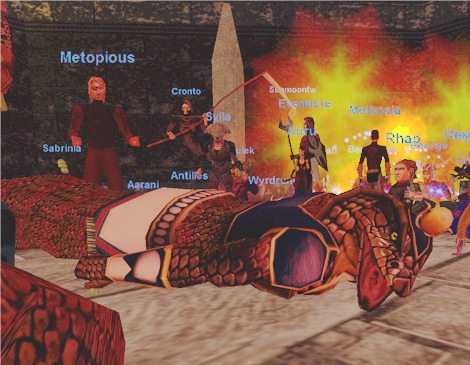 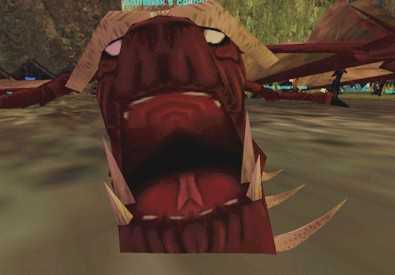 God knows the fun killing Cursed is, yes? With a sliver of health, it was big time comedy when he took advantage of the own basement pathing to warp on us right around this point,

because next to running out of toilet paper at work and being forced to use your dress socks (hypothetically), nothing's more fun than killing him twice!

We got some new stuff along the way, and surprisingly most of it both decent and !MNK !BST~

Rally caps, chants, lucky boxers, you name it - even the best have superstitions and for the Emp, Adorean broke out the big gun, 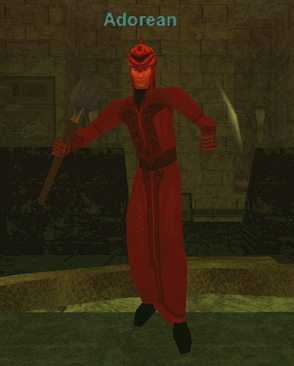 If you asked me when I woke up this morning would I know when I'd hit the low point in my life, I'd have told you it's just not possible - you cannot simultaneously live/experience the worst and be cognizant of such. Waiting for people to log in for another Emp attempt, however, all of that hopelessly idealistic philosophy 101 bullshit went up in smoke when I suddenly found myself directing and choreographing gay S&M pr0n in a computer video game.

I had an assload of them ready, but accidentally closed without saving my scratch sheet and don't even ask about the white lines on shit - sorry. =P