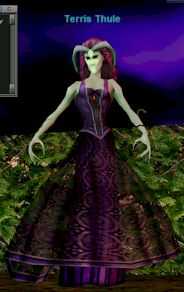 I wanna know what Scent of Terris smells like now.

After minor meltdown, the Evil-Empire is back - thanks for your patience and the surprising array "fix the fucking website asshole" tells (not stalkers - the guild ccc). It's okay, though, I am a kind and forgiving person not prone to collecting a massive cache embarrassing material targeted around one person for use sometime in the future and/or in a bid for political office.

Actually, I get asked many many many times per day what I think about PoP, and I try to answer each person and talk with him/her and I also feel I have a very good idea what the general consensus is with respect to the players, and it's favorable. You know me, I'm VI's number one fanboy, so I'd never say a disparaging word (jeje) even if it sucked, but the truth is PoP is so far worlds apart from SoL: zones are itemized, quests are existence and working for the most part and the art is impressive considering the limitations - the raven and cute frog own, the flying greyhound dragons are cool and all, but that's what a wizard familiar *should* look like. Anyhow, pictures will be a degraded for a bit until we make sure we don't slag the server (again). 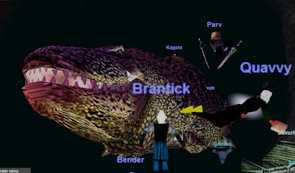 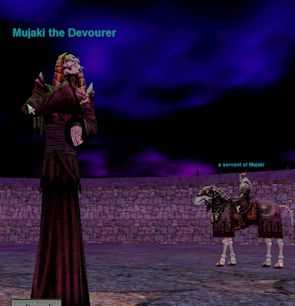 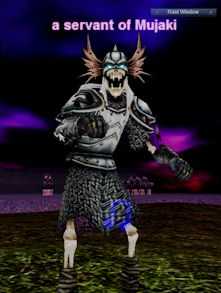 Of what's not so great, thus far, two things stick out in my mind: potential issues with flags and risk vs reward; and as was mentioned on our message board, both are can be illustrated in a single example, one which I hope VI will plan around as more content is unlocked. First off, I will say I do like flags vice keys, and the concept in general harkens back to old school MUDs, another plus as it gives your character an immutable past without the burden of carrying around a gimp soulbond key - and like MUDs, that NPCs respond differently to you because of your past and not simply killing hoards of green con faction mobs is an undeniably big step in EQ quest generation. Hey, I know I've killed your King and Queen like 50 million times, but look, I'm really sorry and to make it up to you, I've gone out and waxed these insignificant goblins, so we cool right, dog? Anyhow, wherein enters a problem is that if flags are tied to killing a particular NPC, then some classes (tanks) are at odds with the objective, that is, to be alive when the NPC dies. This hasn't been a problem for us yet, and with any luck it won't be; while I don't like that going LD can screw you, I can accept it a whole lot easier than doing your job and dying in the line of duty and still getting the shaft.

Oh and with regards to the patch message about carrying a gate item in case you get stuck inside a quest area - well, frankly, that's just not always possible. Even if a person does, unstable gates collapse (this happening on a 30 sec cast potion is pretty gay). In some cases, there are no mobs to even die to in order to do CR, with your only escape being the next group to do the quest. This might be acceptable, but there are many players bereft of a standing raid guild to come bail them out. With petition response time measured in days, there should be some mechanism by which to escape should a player be stuck in this position. If VI is intent upon making it an undesirable situation, issue a 1 min cast right click potion of release (raw kill the character) or rune of capitulation that TL's the player to a known and potentially dangerous position. The player would still need to CR and get res'd, but at least he/she would not be stranded and like keys in plane of sky, the rune/potion would be lost upon zoning if not used. That took all of about 1 minute's thought, about as long as it took them to type up the cop-out patch message - imagine what they could do if they sat down for 5 mins over lunch and figured something out?

But speaking of stranded, that reminds me - my sister and I are 14 months apart and people were forever mistaking us for brother-sister twins, which was probably hell for my parents looking back on it, anyhow, one of the things we tried to do was strand the other on the toilet with no toilet paper.

I have no idea when the game started, but we used to take great pleasure in leaving the person hopelessly stuck without paper, or even better, with just one or two little squares left coating thecardboard role, because, like any game, there are rules - albeit they are unspoken and change depending potential impact. Like it would be too easy to just leave an empty roll on the dowel, and what fun would that be, as the other person would easily notice the taupe cardboard color vice the clean white comforting mental check-off color that says it's okay to go ahead and drop down for some gastric violence.

While we've resorted to trickery at times, such as when it gets down close and there's only a few windings left on the roll, it has been unwound and then rewound loosely to give the appearance of more paper, the most satisfying is to play a strategy war, akin to picking team captains in baseball by gripping the bat hand over hand, higher and higher, where neither one of us says something to the other, but you can tell the game is totally on - a beleaguered roll of toilet paper caught up in war of feints and feigns, progressively smaller lengths punctuated by great reams of paper flying off at once all in a mental game to have just the right amount of paper left on the roll to leave the next person foolish enough to keep playing this game of fecal chicken high and, ccc, not-so-dry.

Like I said, I know it's fucked up, but it was so fucking funny to come home or walk into my room and find the old toilet paper roll just as I'd left it, with it's onion peel thin skin of paper - or better, with it torn apart and missing layers of cardboard, setting there - the traditional sign of defeat, of having been owned and left stranded; neither one of us would say anything to the other, unless it was a particularly gory the circumstances~

I still play this game at work, I just haven't clued anyone else in, yet - I know I've won, thought, when there's a magazine in the stall missing pages, but the most satisfying victories are when I see someone gingerly waddling down the hall, arms akimbo with a sick pallor look on his face or, again better, this game is all about degrees, you see, stumble into the bathroom to find some poor bastard muttering to himself while furiously scrubbing his hands, steadfastly refusing to make eye contact with you so as to avoid explaining his sudden bout of fastidious hygiene. I'm tempted to say something, but you know, the rules...