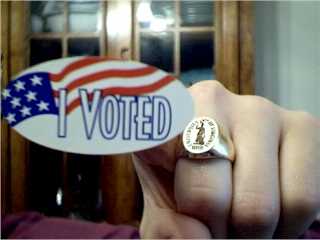 Of the many obligations and responsibilities imposed in a democracy, it is telling one of the most important is purely optional: the right to vote. I won't begin to tell a person how to vote, like religion and other matters of faith and belief, the choice is a personal one, thought I certainly enjoy true debate and discussion of such, rather I only ask the jaded grumblings of inefficacy or the apathetic tenure of ignorance be shrugged off such, at least for a day, that the worst form of government, except for all others, remains vibrant and alive, rife with not just the wardrums of political grandstanding but with a informed, opinioned and expressive citizenry - as has been demonstrated in perfect clarity, each individual vote counts, and the course of an election and a nation has swung on the precarious pendulum of those who would manipulate minds with the siren song of predigested life or coaxed and cajoled media sound bits. More to the point, if you don't vote, you can't complain.

I digress and wax passionate; millions of people have fought, struggled and died to bring you the inimitable freedom of chose - if out of nothing more than respect, please, go exercise your blood bought right and vote.