I guess I should be happy I don't know how exactly how many spawns are being blown, like that bad ass Paffa dude on the first wave, but it still bugs the shit outta me VI hasn't yet learned, contrary to their belief the Euro/Asian timezone guilds are upset about patching during primetime, they could not be happier to have full reign over the server when it comes up. This problem has been around for a long time, and it's almost passe to bitch and moan about it except the fix is easy...

The 3.5 day respawn? Please. Unless we pull some gimp shit like PnP a standing raid force, that half day is meaningless - it's just enough extra time to piss people off. So until we start making the unreasonable request for guildmates to to take days off from work or gank spawns at 6:30 AM PT to compete, we sit here, ass fucked and locked out HoH and Tactics, losing Bertox to griefers who send taunting tells right after the deed. Good thing BoT is comparable for spec parchments, and PoS is so well laid out, jeje. =P

Which brings up an honest question: did anyone even run through PoS and test playability on a required min spec system? Or more to the point, did anyone even run through with a P4-2.8, 1 GB RAM, GeForce4 Ti-4400 at 640x480, 16 bit color, no models? There are places in PoS where frame rates drop to 1-7 fps on the above - I can't image what a min spec system would do as the vid card bursts into flames. A /viewport of 200x200 made it roughly playable again, but I can't fathom that was intended. Please fix the clip plane when occluded or remove some of the fucking trees. 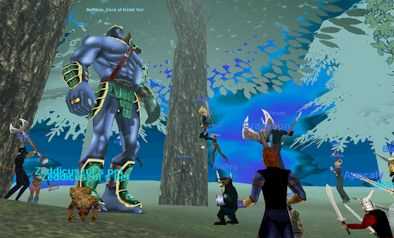 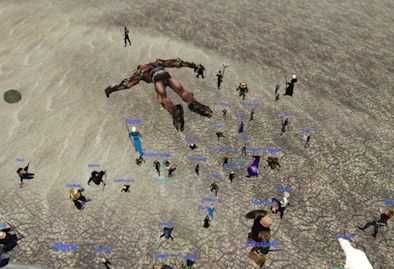 Oh yah, and to add insult to injury, while L61+ rogues now get an innate no-cost run speed increase faster than SoW while hiding/sneaking, bard fleet of foot is either broken or totally gimped - I don't whine much (jeje), but the description alludes to a significant increase in speed. What's the deal?

So, despite all that shit, the Evil Empire steamrolls on, and I love going into encounters without a clue, flying blind and yelling what lands, what's resisted and suddenly find yourself winning. Even losing, the thrill of trying it first, of not having it all laid out in Safehouse spoiler threads, of learning from your losses - how, and more importantly why, you, collectively, regroup from such is far more the mark and measure of a guild than hollow wins on someone else's coat tails - I suppose LoS could go it the easy path, but that wouldn't be half the fun or near the drama. LoS would like to thank Daelomin for stepping up and PoP'ing this expansions cherry and we all look forward to seeing the fruits of his labor soon - Bzul brings LoS full circle, back to a pulling warrior GM, and as always... all Jangos complains should go to him, not us - we have nothing to do with Jangos, honest. 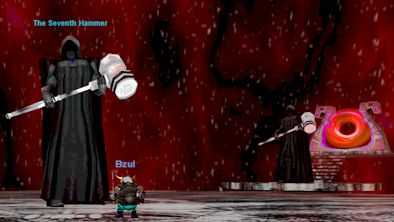 Anyhow, everyone keeps bugging me to post loot - I have to be honest, however, and say that loot is nothing spectacular, I would post it otherwise. Better stuff drops in CT, but truth be told, I'm fine with this on the lower tier planes. I've had as much fun as I can recall aside from 1-50, in PoP and the sheer size and need for exploration leaves me hungry for more. As long as loot scales with that challenge and time commitment, then PoP is going to shape up nicely. C'mon - have I ever held back from you guys before - am I trying to hide uber leet stuff to prevent it from getting nerfed? When something kick ass drops for us, you'll be the first to know about it.

Speaking as a bard in the rogue group, my fellow patriot Zykium

We didn't fight and win the Cold War for nothing - don't give into those pinko commie monks who whine about pulling and dying!

Heh... and I thought I was shameless. 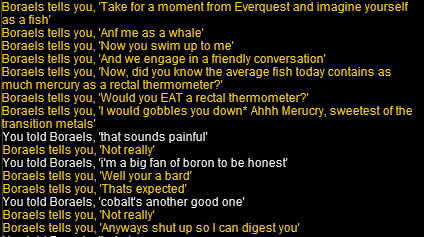