The PoV dragon was due up, and as usual, we all got our hopes up that he'd be alive at 5 PST, but with the usual courtesy given towards pessimism and Team Timezone owning us, but holy shit - for what reason and at what cost I do not know, Aerin`Dar was up! The problem, ccc, was we got jumped by another guild who rushed past and clicked down - nothing, I can assure you, is simple around here~ I rarely want people to fail, unless it's Virginia Tech (Jesus Christ - fucking castrated turkey is their mascot), but I unabashedly was thrilled to fine out the wanna be ninjas had wiped out. Thanks to Jangos eloquent and stirring words, the Evil Empire swooped down for the win, finally unsealing the Halls of Honor to the Western World. I'm not sure what Mauvin did, but killing Mith Marr, god of missed LoH's and "We need defensive!!" whiners, is gonna make my day...

[insert picture of dead dragon that like 50 aholes promised to send me, but didn't]

And speaking of killing Gods, I've been remiss to mention 7th Hammer going down like Desp on a boy scout a week ago. It was actually one of more enjoyable aspects of EQ - the late night crew, and with drive, determination and 9 people, we figured wtf how can we lose. Turns out there were many ways for us to lose, but two evolutions and mild YOU NEVER HELP ME trial drama later, we fielded another group and took him out in back of this courthouse and tried a little bit of his honor on, LoS style: 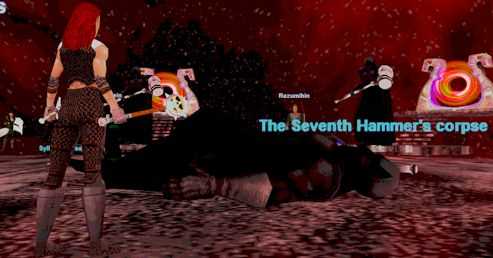 The trials are a lot of fun, I mean, we pioneered ghetto AE, but I like how the challenges and objectives are laid out such that any particular group composition can win with heads up play. And like doing trials with 3 or 4, now I'm anxious to get back up there, and see just how few it takes to own that Halas homo.

Keeping with killing the cocksuckers, as much as I like CoD, why the fuck does that little pusling give out only 30 keys per kill? Here I was ready to compliment VI on the planar projections eliminating a lot of my concern with flags (aside from the fact if you miss one flag, you're assfucked for days and possibly longer), and then the little shit poofs on us. Anyhow, I'd hope with all the competition and cockblocking, intentional or otherwise, VI will reconsider the use of limited flag/key mobs - if you're at the event, you should be put at odds with the rest of your guildmates over who can and cannot progress.

All that aside, and me still being in shock over getting PoV dragon, we found Bertox ring not blown! How fortuitous~ This is another event I really enjoyed, it was a run and gun, hack and slash, frantic race that reminded me a lot of the constant small trains err pulls in PoH (with golem pets). The multiple fight management and resource coordination was a blast, and after 1h 20m, I hit track and saw...

Somehow after 80 mins of chaos, the confusion of the pull owned us, but I can't wait for the ring to respawn, this rough mofaka is ours: 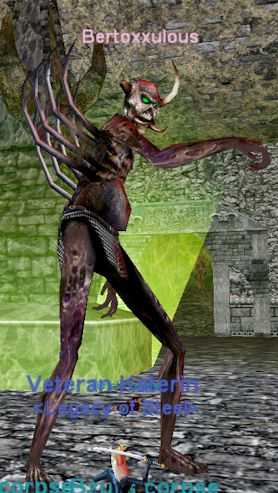 So close it hurts~

So, on to other things, 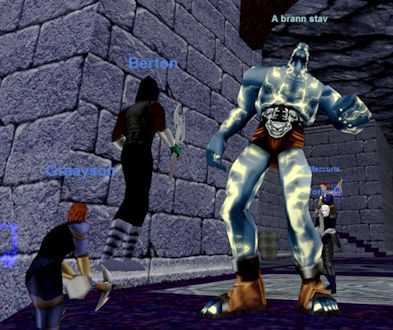 Karana, you pussy, I owe you big time for that shit back in SK many levels ago...

with Bzul at the helm~

In closing, not that anyone asked me - hey, you're reading the page - but amid the usual retardry on the message boards, someone noted, "Everything has the *feel* that the people that are left, are just kinda playing to pass the time until something new comes out, and everyone can get away from VI/Sony." And, again, not that he'd have been the first person to say such, but at the time I think it merits some comment. Right now there are decidedly two camps in EQ, those are caught up in the new expansion and working very hard to explore/exploit it, and yes, those who are passing time - with very few left in between. The greatest common tie in both, however, remains the people and friendships we've made over the 3+ years of devoting more time to this game than many people do to their jobs - check our your /played sometime and compare it to the average working time per year, about 87 days.

What's next, who can say for certain, but if anything MMORPG's, for all their problems, addiction, and Crying Game surprises, have brought together a tremendous number of people and legitimized the nature of net friendships. The recent fan faires and informal guild RL gatherings are a good indicator this is much more than just a game, and so while people are busy right now, God knows I am, I don't think the community, on the whole, is on the decline. 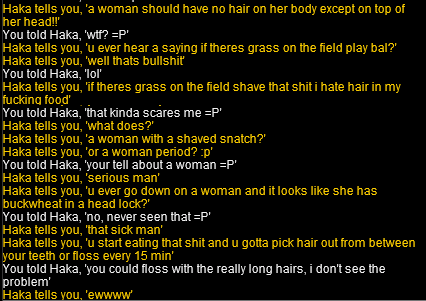 Welcome to Quavvy - who starts thing out right: