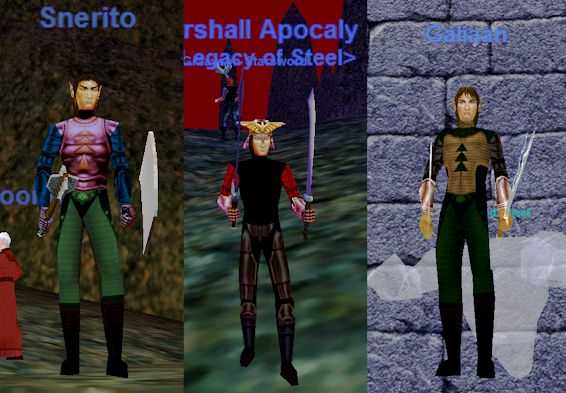 Hot damn, I feel like I just fell out of a tornado - I'm finally back home with my Big Important Thing having come off wonderfully, but my mind and body are still reeling. I looked at the calendar and was shocked to see Christmas is right around the corner, which owns - I love this time of year. The only thing I can't really understand is why I'm getting cards from my church which read "Happy Holidays!"

Err... WTF? Are we that sensitive? I know some stores which have termination policies regarding saying Merry Christmas to customers (while, interestingly, it's okay to say something about Hanukah or Kwanza), but has PC gone so far that we're worried about offending people with a Christmas card to those who you *know* celebrate the holiday? I can imagine some piece of shit telemarketer/mass mailer to pull a stunt like that, but how successful has Room 101 been that not one other person even picked up on the lack of Christmas in a Christmas card? Double plus good cold day to you, too.

What the fuck is wrong with people these days? You can't even say something nice about a 100 year old dude on his birthday without someone crawling down your ass with a vengeance. Self censorship is one of the worst things a person can inflict on himself, but how much more awful when we're browbeaten into such a pitiful state under the insidiously creeping guise of protecting others' sensibilities. I'm not advocating being an overt ass, such scandalous and insensitive words, wishing a Merry Christmas and Happy New Year, are anyhow, but if a person bids me well during Ramadon or gives me a dradle, I'm not going to get offended.

Anyhow, you didn't check here just to hear me bitch and moan about RL, you came here for me to bitch and moan about EQ, to read about how some officers in some guilds leave ShowEQ bots FD in some zones, which subsequently log in unguilded twinks to blow spawns the minute they pop. What owns is when the guilded characters blow spawns an then feign ignorance - which, believe me, I'd normally buy off on their stupidity, except, hot damn, I can go back and pick them out from HoHb that were once on their homepage, but now have oddly replaced with unrepentant expressions of homosexuality - it looks like a personal problem to me, but none the less, in between those bouts of Greek love, go fuck yourselves with those weak sauce lies that consitute a pattern of really gimp shit.

If a guild beats us to a spawn, and please - most have 8-10 hour head starts each day - and wins legit, I may not like it, but I'll respect it. Killing stuff and keeping it dead is how the game works, and is intended to work, but don't think, however, just because you've repeatedly blown the HOH trials standing between LoS and Sol Ro with a Hail and no intention of actually doing the encounter that you're the better guild.

I've heard this and similar problems are increasingly common on other servers, and I sincerely hope VI is working on a fix post haste, and not the random spawn timer which is currently sorry mythical bullshit, because as I alluded to in past updates, this petty cockblocking is going to erupt into some major drama serverwide if it isn't resolved.

So, stuff dead and the Evil Empire munches... err marches right along~ 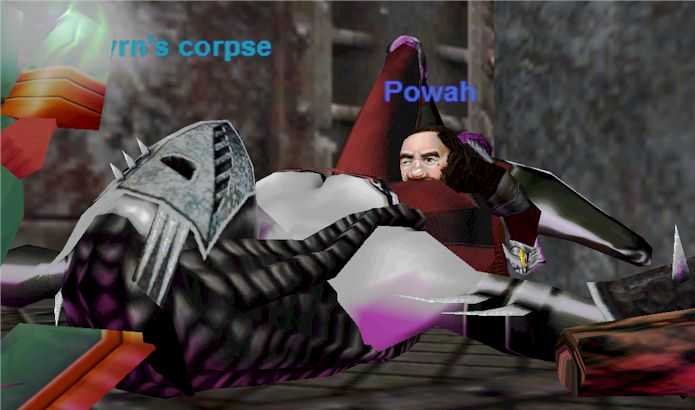 Like I said, I'm back, but obviously I have no stalker tells - that whole not being able to log in thing has its downside. But hey, just in time for the Christmas season and the raft of new subscribers, you too, can join the shameless attention whore minions and dodge Nameless's nazi GM's and name filter with fun and profanity for the whole family~!

Anyhow, I don't want to leave anyone hanging, so, courtesy of my man Dinamas, here's A guide on how to skip content by a group of wanna-be's, with a few unoriginal a la OS crypt spoliting bastards:

Wanna get to Uber Mob XXX..but those pesky locked doors in the way?!?

NP--just get a friend who knows the zone well...he can hold the doors for you! 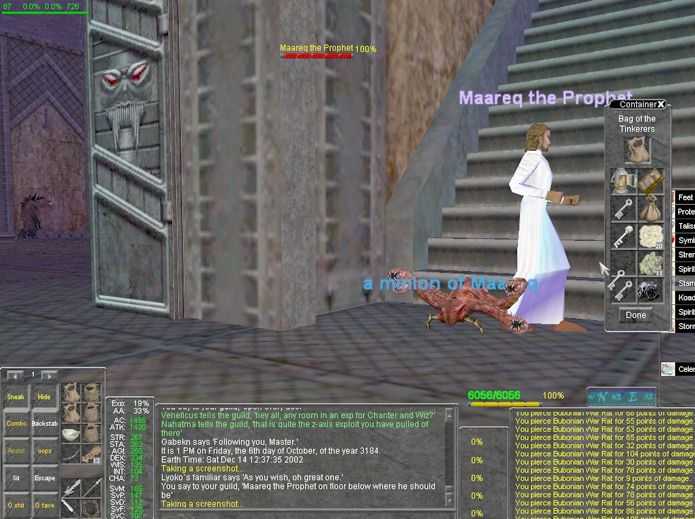 Remember, he has friends and so do you, ask them to hold the other doors for ppl that might show up late etc etc.. 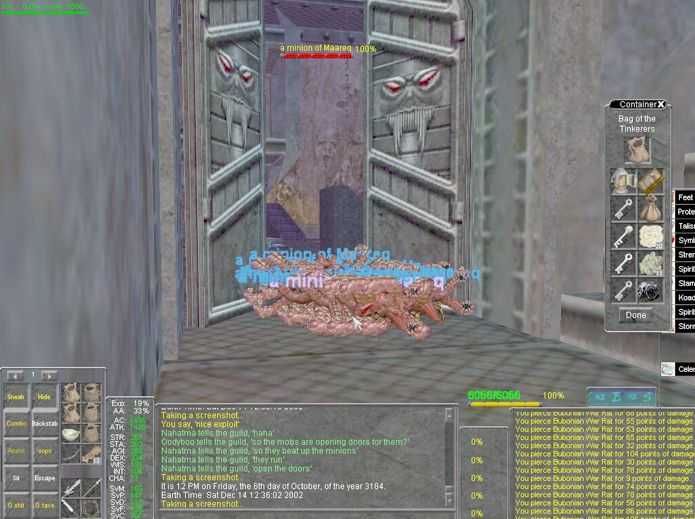 Now that the doors are a non-issue, you are all set. Go take a whack at the mob you have no right to even see yet!!! 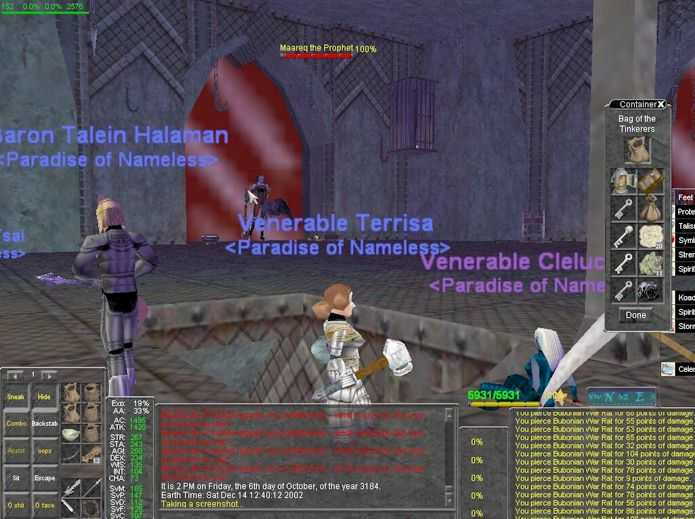 Oh boy..this is gonna be fun! 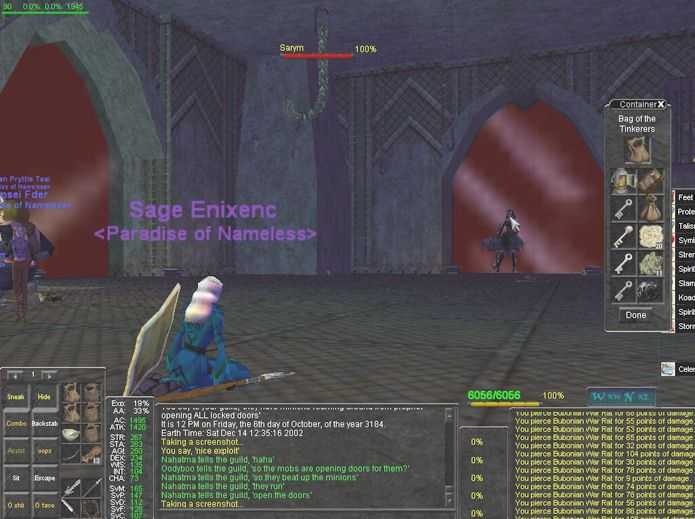 Oh...MOST IMPORTANT...if anyone shows up and asks questions...play dumb.
-we only want test
-no abc
-what wrong? do what mobs in what order
and my favorite...
>< @@ QQ