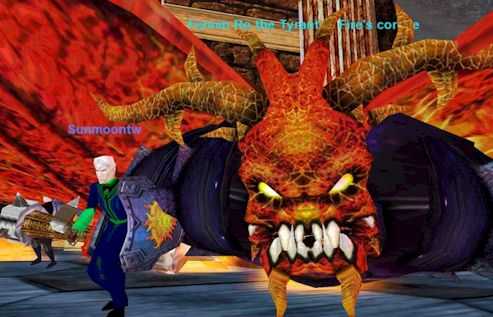 So 12 of us were in PoFire doing a little xp and we noticed Fennin Ro was up and needed to die (again) - we cleared a few mobs, asked a couple clerics to come, cleared a few more mobs and it was go time, baby! Three hours of kiting later, Fennin Ro died and the obligatory asshole of necrii pets spawned, who then summarily AE'd, aggro'd a shitload of guards and killed us before I could get a good screenshot of the carnage and drama. 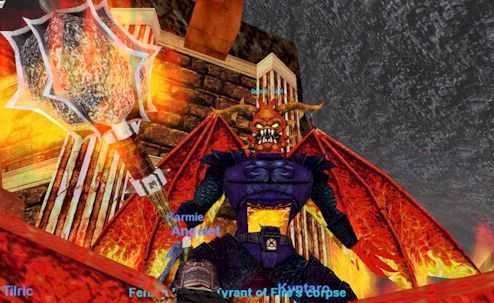 We've also been quite busy with the looting and plundering, 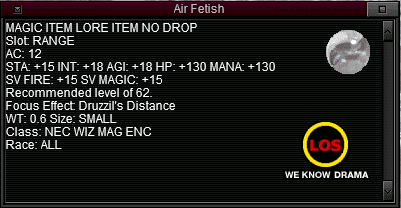 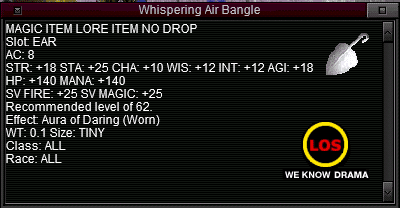 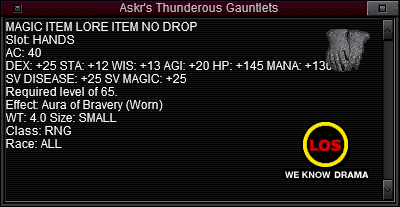 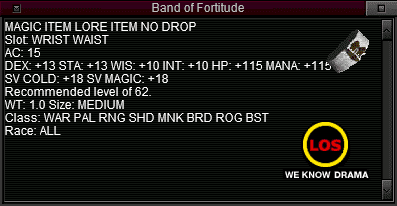 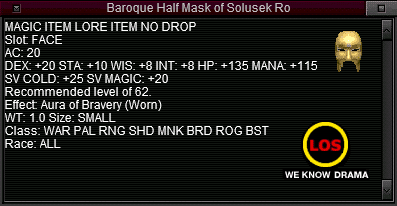 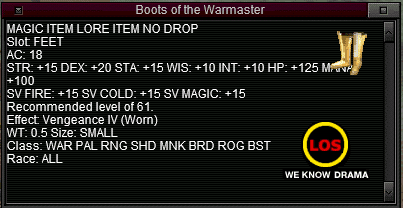 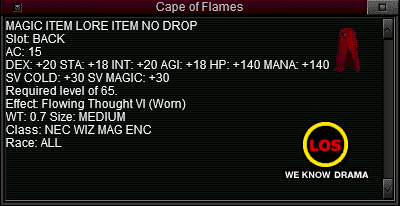 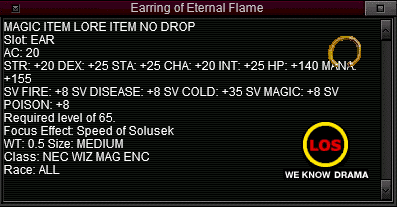 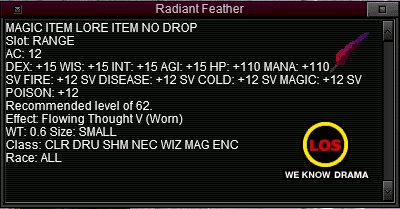 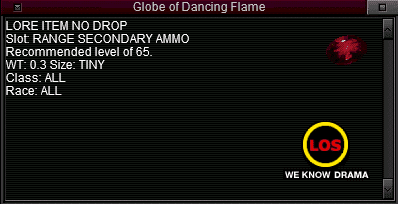 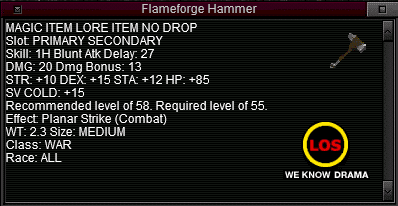 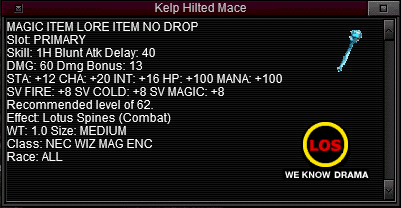 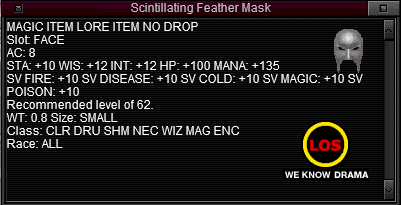 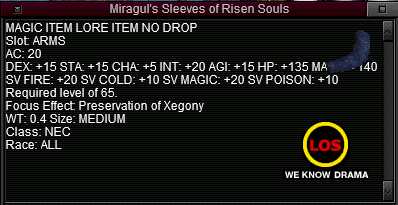 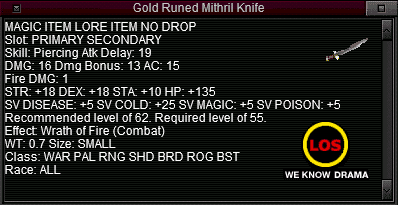 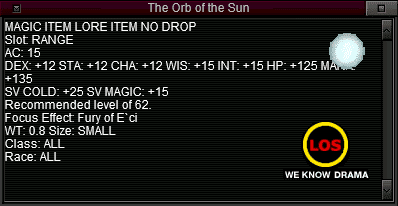 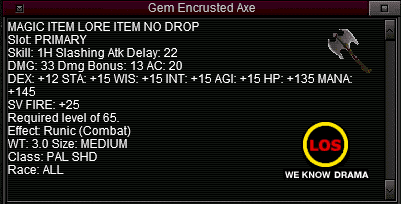 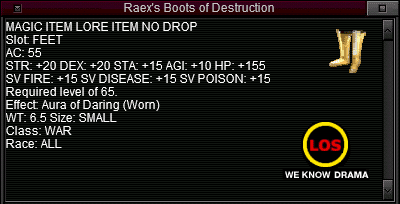 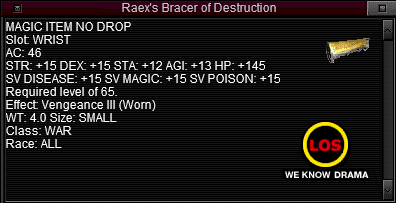 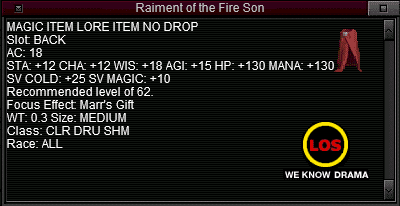 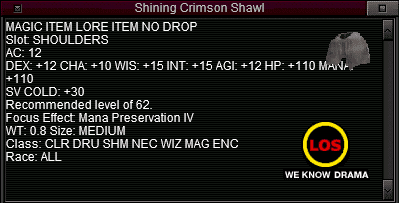 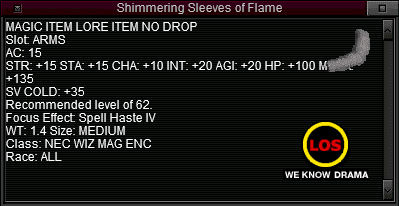 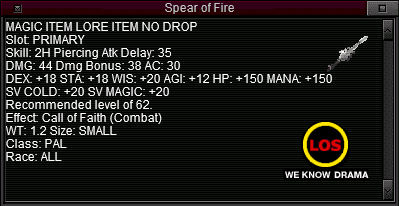 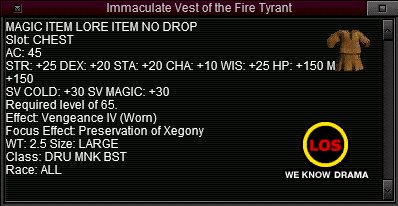 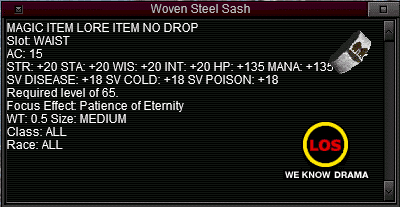 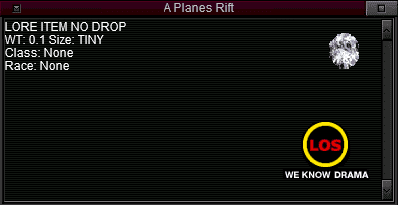 All in a day's work for the Evil Empire.

And as some of you heard about, I woke up late here recently, and instead of using the trusty Mach3 (yes, I have two) to shave my pubes, I thought, "What the fuck?", grabbed clippers instead and went to work.

In a bit of pube shaving etiquette for you tomentose knuckle draggers, you shave the pubes before a shower, so you can wash away any traces left behind, but of course, before my shower I wasn't fully awake. This may or may not have contributed to the attendant risks placing the equivlate to a gasoline powered set of hedge clippers near my pride and joy were somehow acceptable for the admittedly modest increase in speed, but that's for historians to decide - I'm a doer, blazing new trails in the field of personal hygine and grooming. Regardless, things are going great and I'm giving serious consideration to the thought of switching to the clippers full time, not to mention the bonus buzzing/vibrating aspect and all at 6AM...

But I played with fire - on an errant pass to clean things up, I got too close to the sack, and I found out suddenly that no matter how well clippers might perform on smooth skin, the wrinkled bean bag is a different story. Just as groin transitions to sack, the clippers gobbled it up like a thousand tiny teeth, rolling the meat up like an angry peice of salt water taffy - I yelped like some wounded animal and jerked back the whirling dervish instantly, but the damage had been done: tiny nick perforations along a 1 inch section of sack welled up and started to bleed, weeping blood to match my tears as I struggled to quickly invent some half assed plausible story to tell the 911 operator.

I quickly grabbed some toilet paper and a styptic pencil, but when I applied the chalk-like tip, it was like a white hot poker, and I doubled over and squatted baseball style, bouncing involuntarily as my testicles dangled and dribbled - bleeding, burning, above the cold unyielding tile, as a fuzzy blue rug near the toilet taunting me in unshorn glory. That's okay asshole, I'll be pissing on you later.

I was able to recover, and carefully mummified my balls to staunch the bleeding, and mummified my cack while I was down there - if I had a marker I could have written  U S A  down the shaft to have my own pocket rocket complete with armed warhead. Again, I must stress in my own defense, I hadn't even had a shower yet - it all seemed like a good idea.

After an interminable few minutes the fire raging downstairs cooled, and I gently unwrapped to perform a damage assessment - a long row of pin pricks with twin groves formed from the blades gobbling up the unsuspecting loose skin. I looked around for a band-aid or anything to cover my junks up, but of course the only thing I could find were the butterfly types used for finger joints. Undeterred, I slapped a pair on - only then did it hit me I still needed a shower. To give credit where credit is due, I must say the Johnson & Johnson folks really do make a fine waterproof skin adhesive which I have no doubt has its uses, but this was the last thing I needed on my still-unshaven sack.

Enter wounded animal yelping sound number two, a quick shower and a Telfa pad with tape to wrap up my morning - literally - but I was worried about that shit all day long as I got the thinking about it - I didn't want to accidentally sit down wrong on my sack and eject a ball. I could just imagine a sound something akin to ripping a vinyl seat cover as the little perforations let go and the distictive cartoon *pop* of major injury and I'd be huddled in a corner trying to tucking things back in after a blow out -while JB Weld is pretty good stuff, I don't think it's approved for scrotal repair (yet).

Moral of the story: You can't rush greatness.

Ever wonder just how many mez breaks we get in one night and don't feel like counting all that "has been awoken by *asshole mez breaker*" messages on your screen? Well now all you need do is just run those log files through Mezbreaker Parser and it'll do the work for you!

Coming soon to an FTP near you...