Coirnav Sleeps With The Fishes! 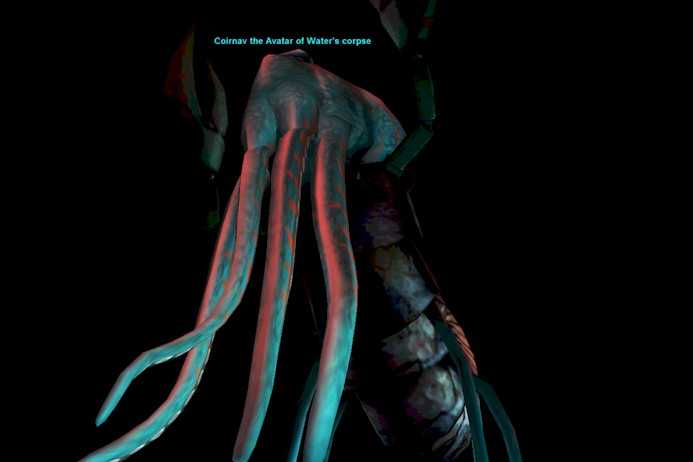 Sorry, the headline was impossible to resist. Actually this was a hell of an epic fight for us - it's exactly what EQ is supposed to be with its challenge, pressure cooker timer and a surprising lack of homosexuality. Compare and contrast to PoAir, discuss specific instances in the space allotted below. I really loved the fashion in which we pulled off a textbook LoS kill - undermanned and down to the wire, with 7 left standing as Coirnav finally went down in a beautiful 14 minutes and 56 seconds. The only thing that sucked, really, was the loot,

I can excuse all that shit tho - I got other things to bitch about. Like Air. Jesus Christ, it's not bad enough you actually have to do the Islands to spawns the Avatars to get up the stairs in the highest room in the tallest tower to find true love and true love's first kiss... or something like that.

No, what's truly bad is that there's no way to tell if the God-awful rings are up. Do you know how fucking debilitating it is to guild moral to do something like Sigi Island and end up getting fucked in the ass by some insulting yellow con ph trash? Who, exactly, is going to farm those rings that it needs to be even on anything but a token respawn timer? At least in Earth, for all its many (many, many, many) problems, the cacksucker who finished it was a decent enough human being to make the ring status knowable by something other than a 3rd party cheat program. Seriously, fix that shit - there's simply no reason to waste everyone's time on poorly scripted encounters any more than is necessary to stall us until PoTime is finished.

Oh yah, speaking of that... everyone wants me to rant about the PoTime rumors we've been hearing, but the truth is I don't have enough information to go shooting off my mouth. Instead, I'll just talk about the facts. After some great discussions, what it boils down to is there's no reason to be first anymore - with each enforced choke point the gap between 1, 2 and everyone else narrows. By way of history, in the past there have been significant advantages to going first, not only in terms of better gear collectively, but in that you're in competition with only the game itself. In PoP, we're seeing guilds leapfrog former number leaders despite getting kills 1, 2 and even 3 months removed - repeatedly banging your head against the glass ceiling isn't motivational, believe me, and farming is something you come back to when nothing else is left to do. Jaded is what the playerbase is like right now, and seemingly endless pieces of leather elemental armor (hint: 3 fucking classes use leather but it drops twice as much as plate that 5 classes share) hasn't been a good trade.

We're so glad to see so many of you lovely people here tonight, and we would especially like to welcome all the representatives of Illinois' law enforcement community who have chosen to join us here in the Palace Hotel Ballroom at this time. We sincerely hope that you all enjoy the show. And please remember people, no matter who you are, and what you do to live, thrive and survive, there are still some things that make us all the same:

It hit me rather suddenly you see, we were killing Xegony a few days ago and I got up to get a drink of water, but as I was walking towards the kitchen I noticed my world had an uncertain gravity about it, a fluidity washed over my limbs reducing all sense of granularity in my movements as I blinked my eyes forcefully in an effort to reconstitute my balance from the odd eruption of misinformation my body was being feed from uncertain sources. I slowly drew my glass of water and tried to drink but the smell of detergent residue gagged my now hyper-activated sense of smell, and a sense of general doom down south gave me pause. I tried mightily to pull it together but my head felt as if where balanced on the head of a pin, teetering and tottering, precarious in its perch atop my now pallored frame.

Huntched over, my hands and arms in a reversed embrace to the wheel to keep me erect, I managed to keep it between the ditches and scurried into the ER dizzy as a coot and with a sudden urge to shit my brains out. I'd just cleared the front desk triage station when the first wave hit, a powerful gastric revolt which jarred my body and unfortunately my bowels to motion. I made a valiant leap towards the waiting room bathroom, but in vain as a wave of liquid shit audibly exploded in my pants, a stream of liquid hot magma perforating my pants leaving them spackled with debris. In this shining moment of my life, I thought it only right to give a speech to all those present, 'FUCK. MOTHERFUUUUUUUUCK-' and then the seemingly innocuous fart given to me as a peace offering by my bowels to relieve my suffering turned Trojan on me, more shit and several Greeks spilling out uncontrollably in a froth of filth.

Needless to say, I quickly found myself in a hospital gown, shivering my ass off on one of those supposedly sterile hospital beds after being literally hosed off in the shower, an entirely separate tale for later. Beyond the thin veil of linens, I could hear the whirl of the floor polisher and smiled a little in fecund pride, which was quickly dashed when I also heard the titter of the female nursing students as they walked by my bed accompanied by the resigned spectre of professionalism, a med student in his first rotation. To his credit, he managed to break the news to me gently that while he hadn't intended upon checking for gastric bleeding when he reported for work, that was none the less the unenviable position we were now both in. I say 'we', and I really mean three people - the doctor, me and my ass. You see, there's really only one good way to check for gastric bleeding, and when the words roll over are accompanied with the snapping of latex examination gloves, quite simply, 'This will be a little uncomfortable.' is a bit lacking.

To add insult to injury (the order may be a bit confused, I admit), not only was something attempting to go in through the out door, but my guts had decided exactly now was a great time to deliver yet another strike package. I was puckered all up, violently contracting to stave off shitting on myself again and here he was poking at the back door. I was gripping the metal bed rails and my ass cheeks started to tremble, my knees broken into sweat and hearing Dr. Stangelove back there asking his assistant for more lubrication was not boding well in the least. Amazingly I didn't pop like a pierced balloon as he began his exam, but I was squeezing so hard I think heard his knuckle pop as his defiling finger made it's wearly egress, but I think I could have done without such a chipper, 'Your prostate seems okay, too!'

I drifted off for a bit, but again was awoken in the night, this time to shit with a vengeance, but now I was confronted with a different set of problems. You see, I was forced to use the ER bathroom. I'm no germ freak, but Jesus Lord, I don't wanna know what was in there before me. I threw down a quick coating of clearly protective toilet paper and dropped down, careful to swaddle my cack in my gown lest he accidently touch the rim.

All this was secondary to that last great insult to be visited upon me that night... have you ever tried to wipe your ass with the off hand? I had an IV line in for fluids and had to rely on the other hand to clean up what even under the best of circumstances would have been a chore. It really was the perfect ending to my adventures in food poisoning and yet more proof for "no good deed goes unpunished" as the offending agent turned out to be a cake I received as a thank you for helping someone out. I'd love say something witty or pithy to sum this who experience up, but I'm just at a loss to explain how my life stays so interesting, it's like trying to explain to your co-worker why you have 4 hospital gowns covering the seats in your truck, somehow the truth, 'so I wouldn't shit on them' is a bit inadequate.

Sorry, I am so fucking tired, I'll have to update this tomorrow.