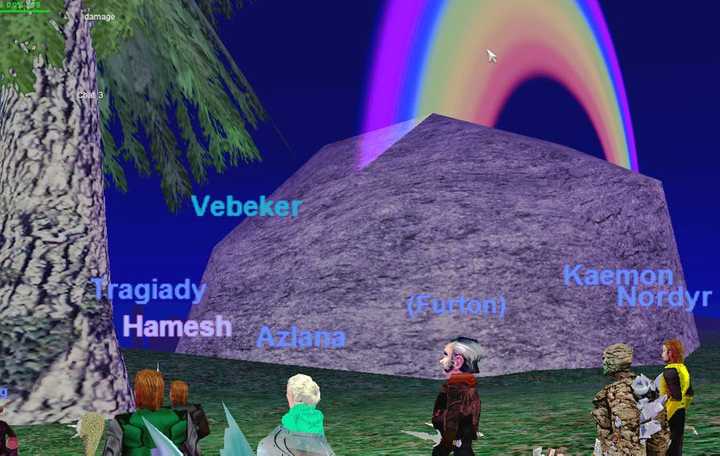 No, we didn't just kill X, aholes - this is a symbolic, happy picture - it gets better, just go with it, k?

So between the best week of my life, gaining an extra inch on my cack and 10 days without power, you'd think I would have something to write about, and you'd be right, but I'm getting a head of myself. Let's get this EQ business out of the way then move on to where I embarass myself for your general amusment and throw more kerosene on the fire which is my Presidential aspirations going up in smoke.

Down to it~~: the Evil-Empire's been steadily building up to it, late night ganks, day time steamrolls and blowing trials in HoH... err wait, wrong gnome, but fuck you, Fwopper, anyhow. Guildchat was buzzing Wedensday night with rumors Time had been reset for some unknown reason, and we descended upon our ill-gotten gains with glee, the running joke of let's do Quarm tonight - and with 47 broken mes's in one trial and a win in Tier 1 with 2 seconds to spare, who would ever have guessed we'd run out of gas after Tier 4? Surely you jest.

Oh but wait - yesterday we again log in to find Time reset once more~! 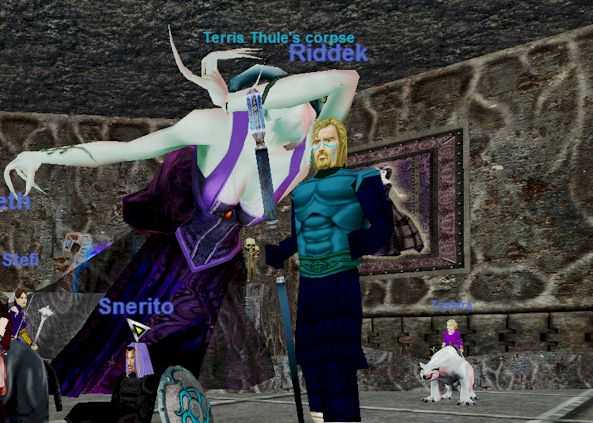 You have no idea how joyous I was at the prospect of doing 2 and 3 again, I love them so, and why not - shouldn't every guild have the good fortune to equip all it s monk twinks with pants and STILL have several pairs left over to rot? Must... resist.... the urge to spew forth hate and vitriol about leather drops andthatnewmotherfuckingregoddamndiculousInnobracerchristonacrutch.

But something was different - it took a while to set in; mobs were dying quickly, buffwhores went in to absolution, people were using assist - holy shit, we weren't sucking!

Onward we ripped through Tier 1, then 2 and on to 3, destroying more bullshit leather drops along the way to find ourselves through Tier 4 in such a blur that clicking up to Tier 5, it seemed as if nothing could stop the Evil Empire's devourous (yes, I made up a word) pace.

For true now, the spectre of clearing time and Quarm in a single night came into rapid focus, and into the maw we poured like 72 of the finest lootwhores known to Man. As RZ fell over dead and we began our ritualistic dance of aggroing Quarm early while buffing, even I was a bit taken aback by the speed and efficacy on display - and the troubling questions which go with it, like why can't we always do this and what mitigating factors had influenced DEretardation, but this was in every sense a full on clinic. Of course, the motherfucker dropped all leather for us, but PoTime, from soup to nuts to Quarm: 5 hours, 36 mins. 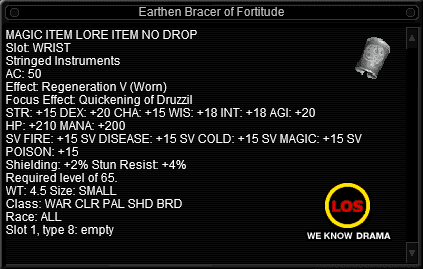 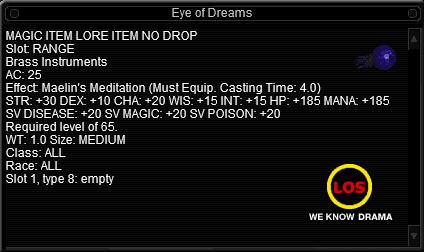 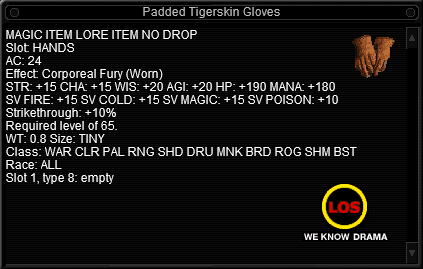 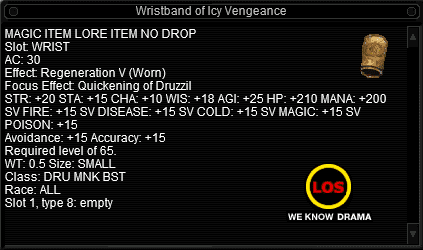 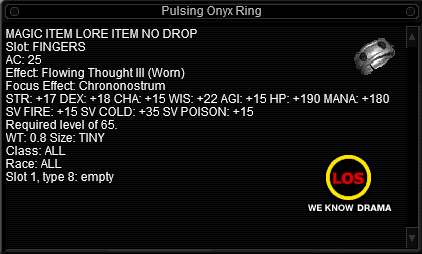 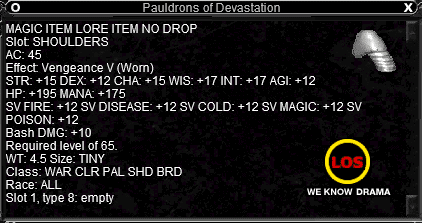 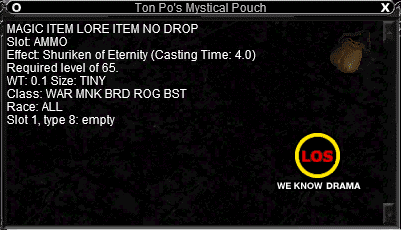 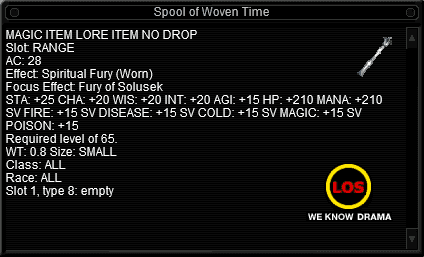 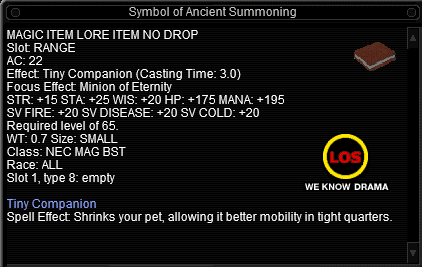 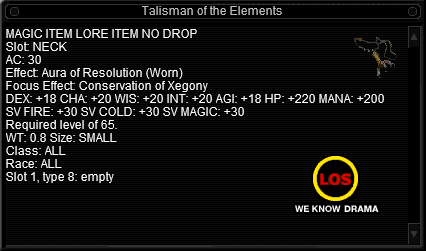 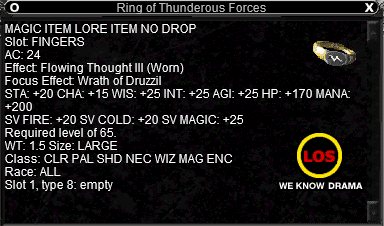 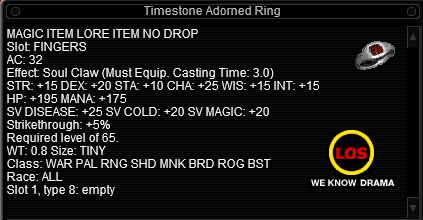 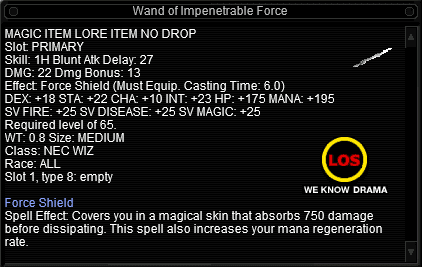 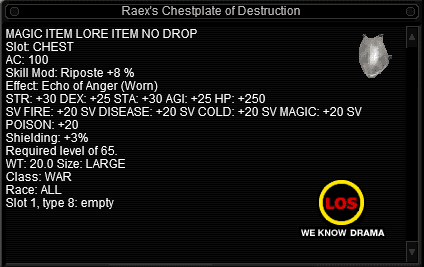 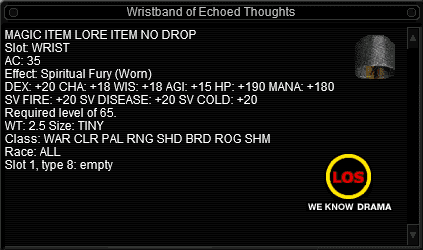 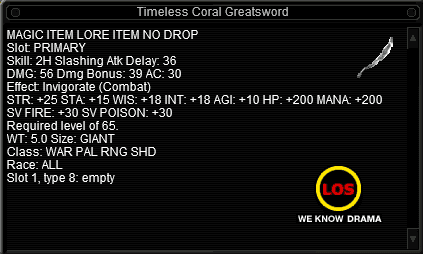 I had ever intention of bitching about LDON on the first day it came out, but I figured, wtf, I'll try it - a departure from zerg force raiding couldn't be all bad, right? Plus ooo~ aug's to fill out my gear and give me that tingly feeling when I repeatedly and subconsciously keep hitting "i" - as if something was going to walk off while I wasn't looking. Hot dammit - I do that shit at work, too - fucking insidiously I'll find myself sitting at my desk and I'll hit "i" only to wonder why the fuck nothing happens - worst yet, I have caught myself reaching for the keyboard to type "/who" as if it's going to magically tell me. The worst is actually SAYING "gu" - I've been in a meeting before and started, "gu Well I thin- err... sorry, I had something catch in my throat. As I was saying, I think..." - yah, you know you've done it, too.

Anyhow, after a few adventures, my cynicisms was proven entirely well founded - such a fool I was to have doubted myself! I'll let someone who gives a rat's ass about it do the real ranting, but for all those asking me what I think of LDON, 36 member raids after forcing us to beef up to 72 is fucking retarded and more than a little insulting to those we have to exclude.

And this really chaps my ass: SoW+ speed runners? Brilliant. Remind me again what I do if I don't have a snare class? Oh yah, I go do the same Mistmoore normal level slaughter each and every time, just like everyone else. Great, $25 bucks for 3 zones which drop crap I wouldn't give to a twink (they get elemental leather) - oh wait! Good to see VI building on LoY's umm... success, and I'm not posting screenshots of that shit until we get something worth mentioning, sorry +50 hp augs aren't good trades for the drama and divisive nature of the raid.

Oh, and while I'm bitching, to the guy who thought up pearl shards: 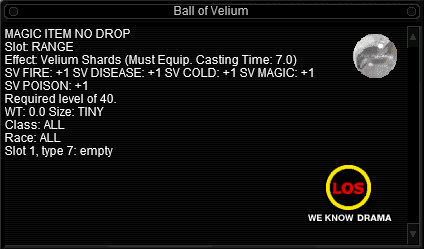 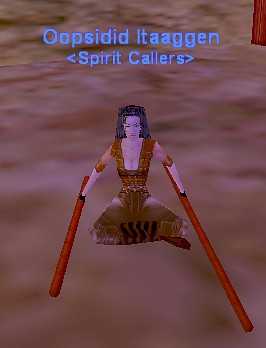 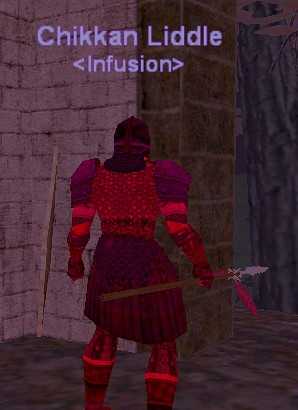 Oh Aatrex... you have no idea how much these quotes quotes mean to us~