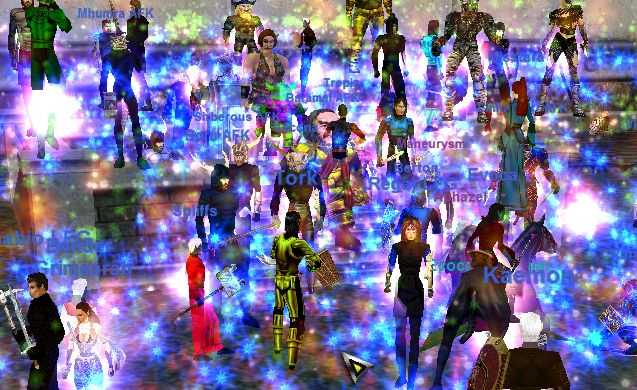 The Stand Down looked a little dull, but LoS was there to help~

So the farming started a long time ago, but once you add Time to the list it's like NToV all over again, except without the fbosses to slow you down. I don't mind, especially, but there's something about the millionth time you do Quarm it loses its initial appeal. At least it's instanced, but even then I have mixed feelings - while everyone gets a turn, there's no more competition - no board drama, no whining, no PnP petitions with /random 2 to decided which of the two guilds gets VS, dispite there being 3 numbers available... but I digress, the art of the steamroll has been lost, and the best you can settle for is training the birds around in PoFire, which while it has its charm, pales in comparison to stealing Christmas from Europe with a heart two sizes too small. 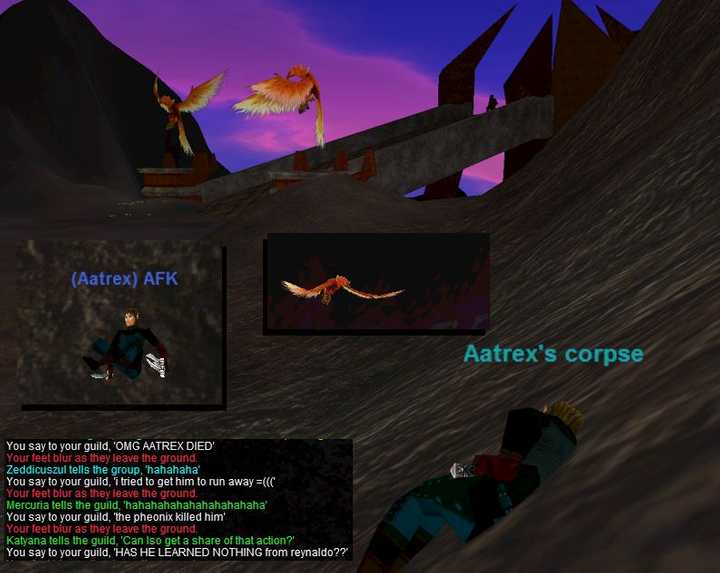 I suppose if it must be one way, this is better than before - but that doesn't mean I won't mourn for the lost diesel fumes.

I keep wanting to mention something about WHY LDoN sucks cock, but each time I start to write about it, this odd feeling of desperation washes over me, it's almost like I'm channeling EQ2's devteam. I could harp on broken missions and bugged missions, or I could spend some time going over why no one in their right mind does anything except assassination or slaughter to bank points, but what irks me most about raid level adventures is that they aren't. It's never fun to turn people away, and if you're one of certain classes you may as well resign yourself to pickup group hell. Sorry clerics 7-14 we beefed up on for Time, you understand - need DPS with only 6 groups, and druids 3-whatever... well we never liked you much anyway, but can my twink get 9? Anyhow, this is the same thing everyone else bemoans - I just thought I'd add to the din in the futile hopes they are added to the big steaming bucket of SoL and lessons learned - and speaking of which, Cestlavie makes a good point: how about removing fizzles and missed notes after a certain level?

God Giveth and the DMV Taketh Away

Oh how wonderfully sly I thought I was yesterday - I'd predictably waited until the very last day to get the truck's registration renewed. Not that I have anything against taxes, they are our Government's sustenance, but that's a debate for later - it's just I refuse to pay nickle and dime bullshit fees until the very last moment. I might owe it, but I'm sure not letting someone else earn interest off it.

So down at the DMV I can tell it's going to be good times for all as the parking lot is choked with every imaginable peice of shit known to man - oh Mr. Ford what have you done? From the El Camino with an astroturf bedliner to make Bill Clinton proud to the Chevette with a 7000 dollar stereo system, all of them told me this was going to be a very long day. None the less, I had a distinct lack of scruples on my side, and with that I entered the fray, received my line number and took a seat by the drafty door, guarding it jealously to escape the smell of pleather and unwashed ass ripe with fouling Thanksgiving leftovers gone horribly wrong which pervaded the holding area. Looking around it became clear I wasn't going anywhere fast, and resigned myself to the noise and relative choas.

After what seemed a lifetime in this purgatory, or at least a good 10 minutes, I noticed many people did not immediately approach the hallowed turnstiles leading to the sacred Service Counter inlaid with the finest imitation gold overlay my tax dollars could fund. Not that this was an entirely new observation, you understand - you see what you call "no good motherfucking cutting in line sorry ass shit" I call opportunity. Abraham Lincoln said, "Good things may come to those who wait... but only those things that those who hustle leave behind," and with the weight of Presidential exigency upon me, I executed a perfect ninja strike - E351, thank you for your ignoble attentionbossing sacrifice.

The clerk working the counter was on to me however, and she said she'd only seen me waiting for about 10 minutes, then asked to see my number.

FUCK, I panicked and produced the most flawless and wholly original lie I'm certain she'd yet ever heard, "I seem to have lost it."

"Well, you'll have to go get another one," she replied with a hint of sadomasochistic glee in her position behind the counter on a stool undoubtedly outfitted with a rod which fit snugly up her ass to kept her upright, lacking a back bone of her own.

I guess she could tell she'd won as I stammered and babbled something about but well I sigh can... and she deigned to take my paperwork. Inwardly I smiled, having triumphed over both stupidity and The System. I paid up and strolled out - see ya suckers.

But it was not to be.

You see, early this week I witnessed a minor accident and like a retard I stopped to help. I patched things up, pulled a fender out, rewired a brake harness and even got two dudes who were cussing at each other to end up laughing and joking - a country boy can survive. A cop had showed up, and again like a retard, I gave him my information as a witness - he thanked me and even replaced the three flares I'd used from his stash in the patrol car.

I really gave it no thought, but apparently someone did - those fuckers ran a "routine background check" on me and I was summoned to the DMV again this morning. This is my sort of luck you see, and the pigeons were flying high and their aim was true to shit upon me, so with a certain sense of pride I marched in the door and again, ninja'd my way into line. The clerk pulled up my records and calmly asked to see my license, which I handed over in the hopes of getting whatever might be the problem resolved quickly - I was headed to the gym, and standing around in workout clothes at the DMV is like an invitation to get your ass kicked by guys who drive El Camino's with astroturf bedlines that you cut off for a parking space.

She took hold of my license and without a word, reached for a pair of scissors - she looked up at me and grimaced with effort as they closed about not just a license to drive, but my license to live! That bitch cut my license up in front of me without so much as a tee hee I could later cling to in my insanity defense for public disturbance and indecent exposure as I took a piss on the DMV banner hanging above her head.

MOTHERFUCK - I LIKED the picture on that license, too.

I asked what the fuck was that all about and she made a sour face - I can understand reading wasn't her strong suit, and if she'd just turned the monitor towards me I'm sure I would have been able to decipher the damning hieroglyphics which glowed a malignant green, but I don't think it was asking too much to have a little explanation. She told me I hadn't paid my insurance on my '88 Ford Bronco, which, cross checking another record, turns out I'd purchased in June of 1973. You just can't make this shit up.

Well, I'm no Sherlock Homes, but just doing the math on things: 1988... 1973... and not to mention I'd never buy an '88 Bronco as the U joints wear out so damn fast with its chronically misaligned frame from the factory, but I wasn't even a gleam in my parents' eyes in 1973 - maybe a dirty thought, sure, but dirty thoughts don't buy cars unless a guilty conscience co-signs.

I was adamant this wasn't my vehicle, but the DMV is never wrong and the woman, joined now by her supervisor because I was a "non compliant customer" - yay, more stuff to add to my perm record somewhere - looked at me as if I were a lying piece of shit, which might have been fair to say around April 15th, but definitely not on November 29th, and the DMV says it's my vehicle, so it's MY vehicle . So I asked for more information, some sort of record, but here's where it gets really good: my name doesn't match exactly with the name on the title, so they can't give me anything more... but wait I ask, "Don't the records say it's mine? Yes? Then give me the information. Oh wait, it's not mine now? So fix it," YOU FUCKERS!!!!!! I silently added in my head. Sadly they were impervious to logic, common sense and my pleas for someone other than the Scarecrow's understudy for the way off Broadway production of this comedy of errors.

I left in a huff, and a very manly huff, too, I might add and called my insurance company, which after a myriad of prompts and invasive gastroenterological procedures over the phone, was able to shed some light:

It turns out some motherfucker (a different motherfucker than the one who'd cut my license up - seriously, fucking a, do you know how hard it is too get a good DMV picture?) used my inf0z to buy a car and obtain insurance for it but never paid the premiums, so now I am left with this gannfest to clean up - it's good to know the DMV was interested in hearing what I had to say before shooting.

It gets better, don't worry - see, in addition to my suspended license, I also have a $545 fine to pay. My insurance company assures me they can straighten everything out, but could not provide a time frame - and the poor hapless CSR on the phone with me sighed before admitting I'd probably have to pay the fine anyhow to get my license back and then seek restitution later. Oh joy.

So here I sit, (did the DMV think to ask how I was planning to drive home?) - yet more proof no good deed goes unpunished. I should probably go do an LDoN adventure now to see how much worse things can get~ 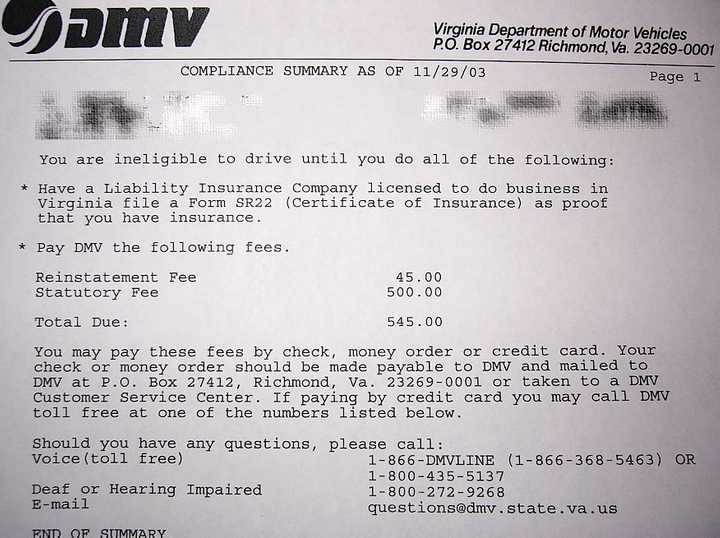